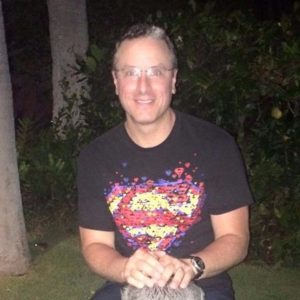 I was diagnosed with CRPS in December of 2015 after an ankle injury.  Like many other people who have CRPS, my lack of success with traditional medical professionals and treatment protocols left me without a hope and a future.

Before I get into my story let me walk you back to 2013.  That summer I had met a man at a Father/Teen retreat who became a dear friend of mine.  His name was Peter Palmer. I was recovering from West Nile and Peter was in remission from multiple myeloma.  I didn’t know why our paths crossed at the time, but I know now.  You see, Peter became ill that fall and his cancer came back with a vengeance.  I used to spend parts of my weekends with him while he was in the hospital and one of his favorite things to do was have me read to him.  On January 11, 2014 I read to him from something called Streams in the Desert.  That moment will be with me for a lifetime. It reads

“Store up comfort. This was the prophet Isaiah’s mission. The world is full of hurting and comfortless hearts. But before you will be competent for this lofty ministry, you must be trained. And your training is extremely costly, for to make it complete, you too must endure the same afflictions that are wringing countless hearts of tears and blood. Consequently, your own life becomes the hospital ward where you are taught the divine art of comfort. You will be wounded so that in the binding up of your wounds by the Great Physician, you may learn how to render first aid to the wounded everywhere. Do you wonder why you are having to experience some great sorrow? Over the next ten years you will find many others afflicted in the same way. You will tell them how you suffered and were comforted. As the story unfolds, God will apply the anesthetic He once used on you to them. Then in the eager look followed by the gleam of hope that chases the shadow of despair from the soul, you will know why you were afflicted. And you will bless God for the discipline that filled your life with such a treasure of experience and helpfulness.”

I didn’t know it then but I know it now, how this would end up being such a blessing for me. I thought about the passage above and how I got my own limp and how there are now so many great things happening because of it.

With that context, let me give you the elevator version of my story.  I rolled my ankle playing dodgeball with my youth group in March 2014 which left me with a partially torn ankle ligament

I had the 4 horsemen of the apocalypse on my doorstep. DVT, PE, Ligament tear, CRPS – one is bad enough much less all 4 at the same time.  Little did I know I also had an undiagnosed issue that would take almost 2 years to fix.

My CRPS got worse after surgeries to fix my torn ankle and attempts to address the chronic clot in my femoral vein.  It spread to my back, stomach, pelvis, head – I couldn’t eat or drink without excruciating pain.  I stuttered and suffered from the very bad brain fog a lot of us get. By June I just wanted to die it had progressed so rapidly and it was all I could do just to will myself out of bed and face this groundhog day of insanity another day. By the Grace of God my wife found Dr. Katinka Van der Merwe on Facebook.  After being so disappointed with traditional allopathic treatments I was very skeptical – but I knew it was worth a try.  I spent 10 weeks in Fayetteville at her clinic last summer (2016) and it was the one thing that saved my life.  In August of 2017 I finally found an Interventional Radiologist who understood the chronic Non CRPS pain I was in, and she diagnosed me with another rare disease, May Thurner Syndrome

It was from this multiyear experience that the seeds of what has become the Burning Limb Foundation were planted. We founded Burning Limb out of a desire to see others find their way to remission with encouragement, compassion and financial resources.  We also know the profound and exponential benefits of a leaving a lasting legacy; what better way to accomplish that than by sharing our experience, strength and hope with others who are suffering from this dreaded disease.  I still live in chronic pain every day – the damage caused by the clots in my leg destroyed the valves in a large number of the veins in the deep vein system, which has led to Post-Thrombotic Syndrome.  In its own right, it ranks with CRPS in terms of pain.  I still have a large mountain to climb and more surgeries ahead of me, but now I am on a mission.

I met Nick Vujicic in September of 2017.  Nick was born without arms or legs.  Like him, I prayed to have my health restored, for the miracle to happen.  I know God is not done with me yet, so I am going to steal a quote from Nick where he says “When you don’t get a miracle – you can still BE a miracle.”

In your own way, each one of you who is reading this now have your own “limp” – I know it will serve you so well as you go out into the world and change people’s lives.

I encourage you to make a donation to our cause so that we can live out our mission helping others do the same.  Help me BE the miracle….